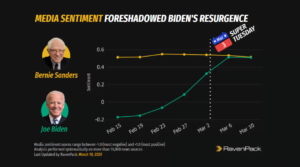 Joe Biden is increasingly looking like the clear favourite to win the next U.S. presidential election. Biden has led since polling began, but he has widened this lead following Trump’s perceived mishandling of both the coronavirus pandemic and the public outcry over the death of George Floyd.

At RavenPack we thought it would be interesting to analyze the race from a news analytics perspective (we are also currently developing a focused Election Monitor to that end), however, before diving into the nitty-gritty, let’s briefly run through how news analytics can provide an aid to crystal-balling elections more generally.

RavenPack automates reading the news and aggregating sentiment regarding specific entities, whether they are people, assets, or places, but how can that be applied successfully to predicting election outcomes?

We know that news sentiment about political parties or figures can provide a useful confirmatory adjunct to official polls. When the two err it can be a sign official polls are off and when they are in agreement it can bring added confidence the polls are right.

In the Brexit Referendum, for example, news sentiment for camps ‘Leave’ and ‘Remain’ tracked polls for most of the time but then on the last day diverged, showing project Leave edging ahead whilst the polls still showed Remain in the lead. The non-confirmation was a warning sign official polls were off and in the end sentiment was the more accurate.

During the December 2019 election in the UK, on the other hand, news sentiment data for the leading parties complemented official polls all the way to the end with both showing the conservatives in a large lead, and in the end this was confirmed by the result: the largest conservative win since 1987.

In a slightly different kind of case study, news sentiment proved pretty accurate in predicting the outcome of the Super Tuesday Democrat primaries as can be shown in the infographic below, which illustrates the late surge in news sentiment enjoyed by Joe Biden who went on to win the majority of votes and became the Democrats presumptive nominee. 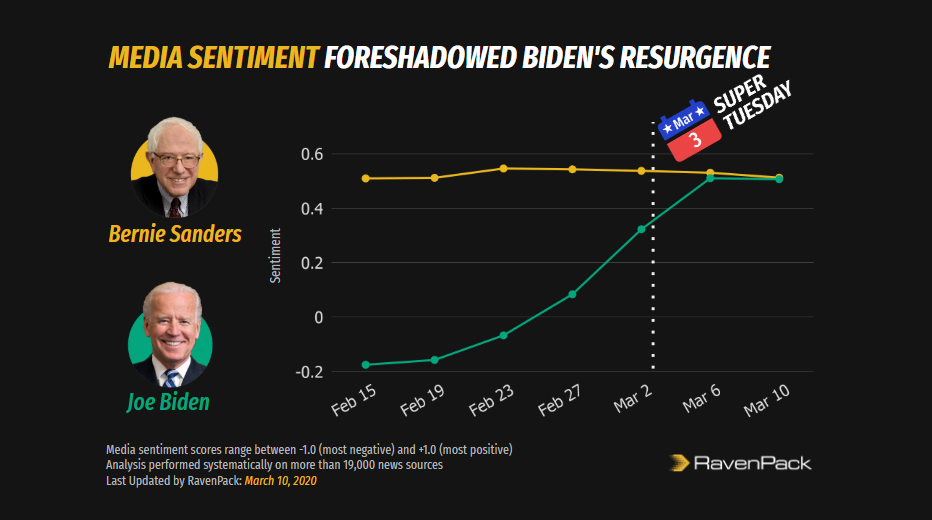 Joe Biden vs Donald Trump: Round 1 of the Election

The presidential election is the next big event in U.S. politics and given news sentiment’s strong confirmatory role, the next obvious question is whether it is confirming official polls or not?

So far news sentiment appears to be supporting the official polls that show Joe Biden leading Trump, as reflected by the charts below. 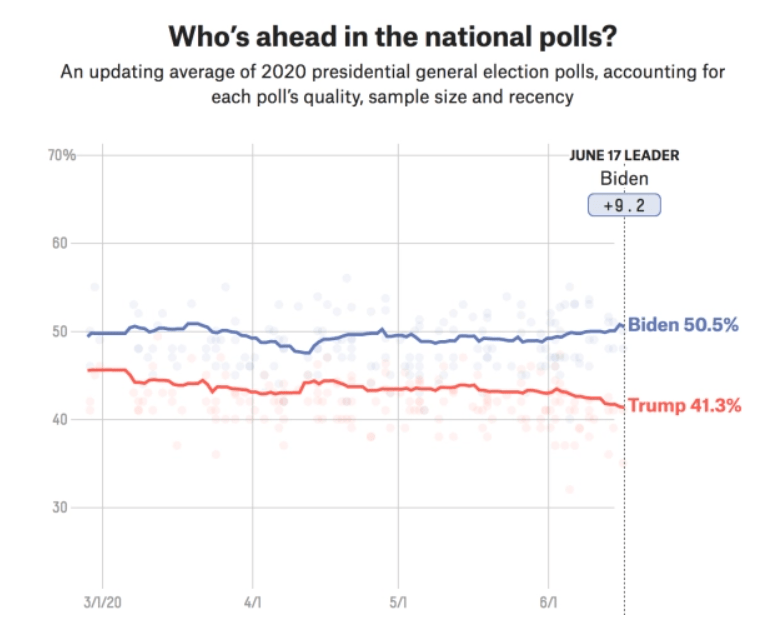 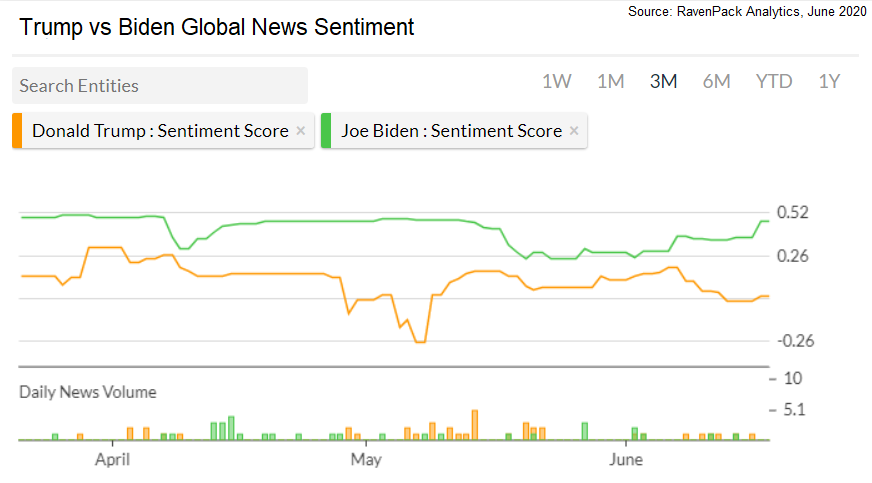 Biden is currently enjoying a big lead in both polls and sentiment which suggests he will win.

Also important, however, is his success at a state level and particularly in a handful of key swing states.

So, how does news sentiment compare to official polls in key swing states?

The table below, from website fivethirtyeight.com, shows presidential poll results in four swing states plus North Carolina, in April.

According to fivethirtyeight.com, whoever is leading in the polls in these four marginals in April usually goes on to win the election. The theory held good for both Obama and Trump. 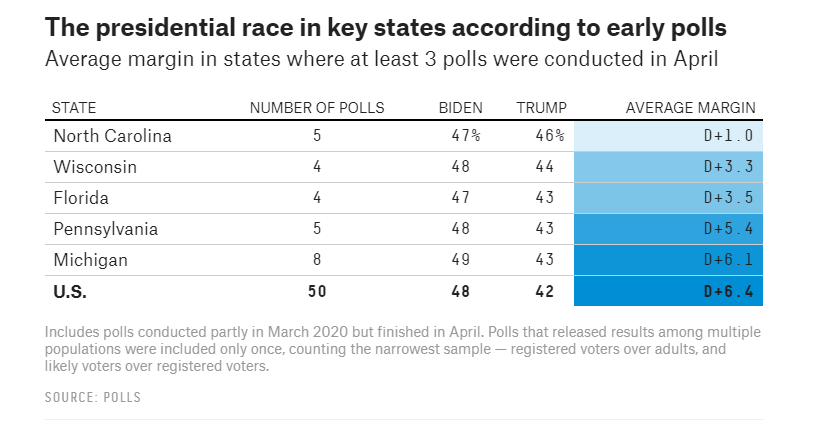 As can be seen from the chart above, the polls show Biden leading in all four marginals and therefore likely to be the next President.

The average news sentiment for the two candidates, derived from our data, in the same key swing states is provided in the table below. 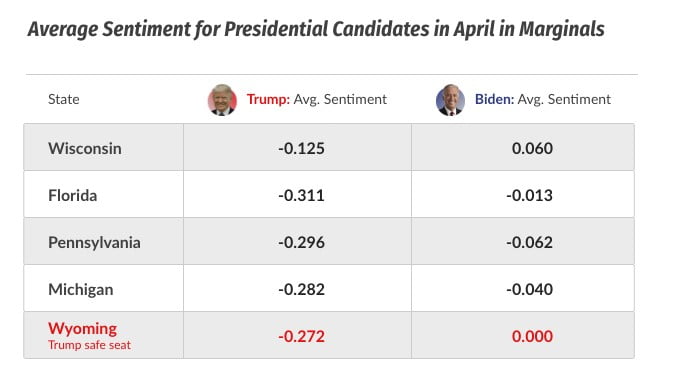 Here too Biden scores higher in all the swing marginals, suggesting sentiment adding confirmation to the polls, and further supporting the case for Biden winning.

Results based on Local Sources

The news sentiment results above are based on news articles from a wide range of over 22,000 sources globally and whilst they are all relevant there might be another more precise way of gauging sentiment in those specific swing states.

One way might be to narrow down the range of sources to only those coming from news outlets based in the swing states themselves – a refinement which is quite within the scope of the RavenPack news analytics suite.

In the case of Wisconsin, for example, this would mean generating Trump and Biden news sentiment only from stories that came from local sources, such as the Milwaukee Sentinel Journal or Urban Milwaukee.

If we took sentiment readings for April from only local sources of news – would they also support official polls showing Biden leading?

The crocodile widening of the divergence in June reflects Trump’s unpopularity after the way he handled the protests over George Floyd’s death when he said, “When the looting starts, the shooting starts.” 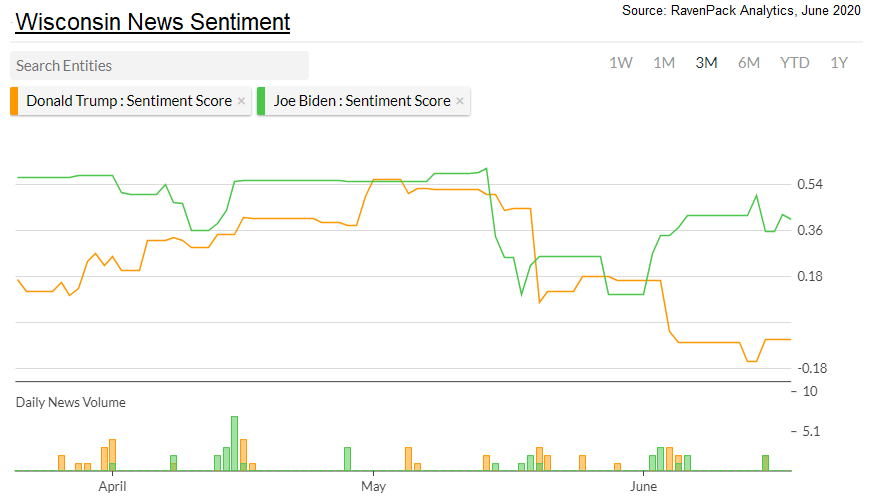 In the case of another key marginal Florida, Biden also scored higher than Trump in April and the Democrat hopeful remains in the lead to this day. 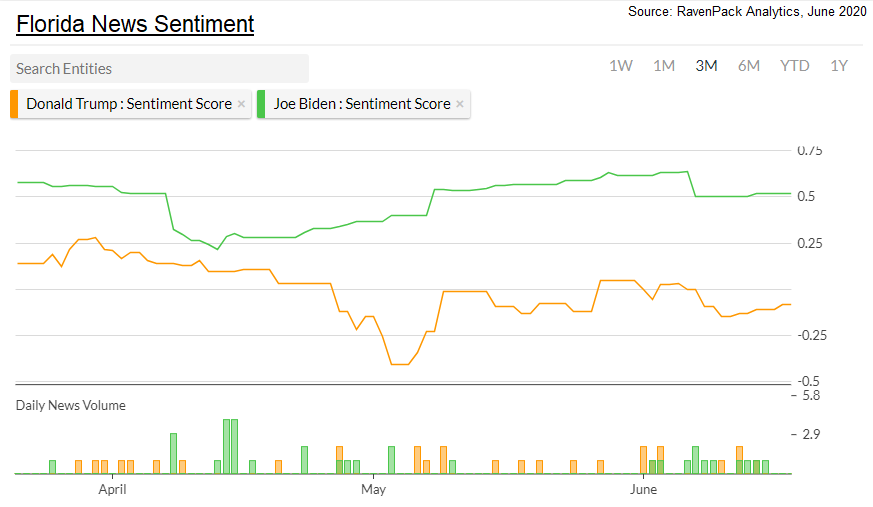 In Pennsylvania, sentiment based on local sources also showed Biden leading Trump in April, and then increasing his lead more recently. 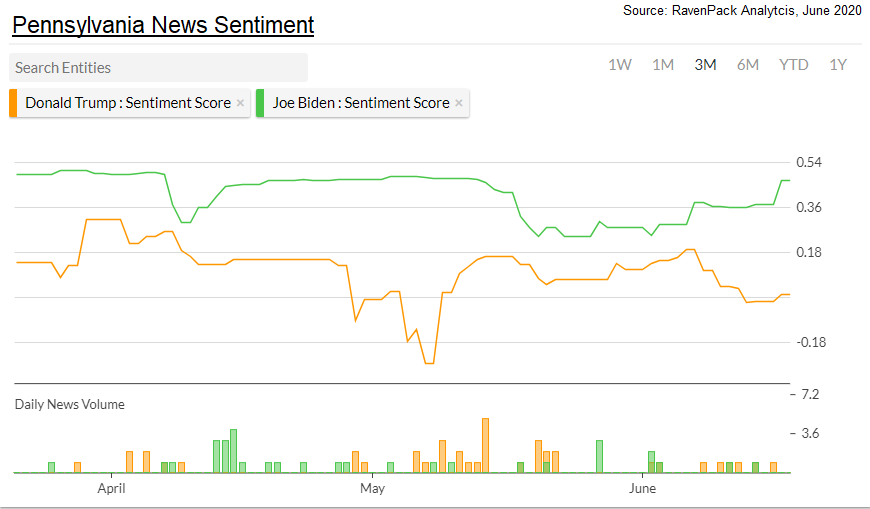 Finally, in Michigan, though sources are more scarce and there is no clear winner in April, the same divergence can be seen in June, following Trump’s looting/shooting remark. 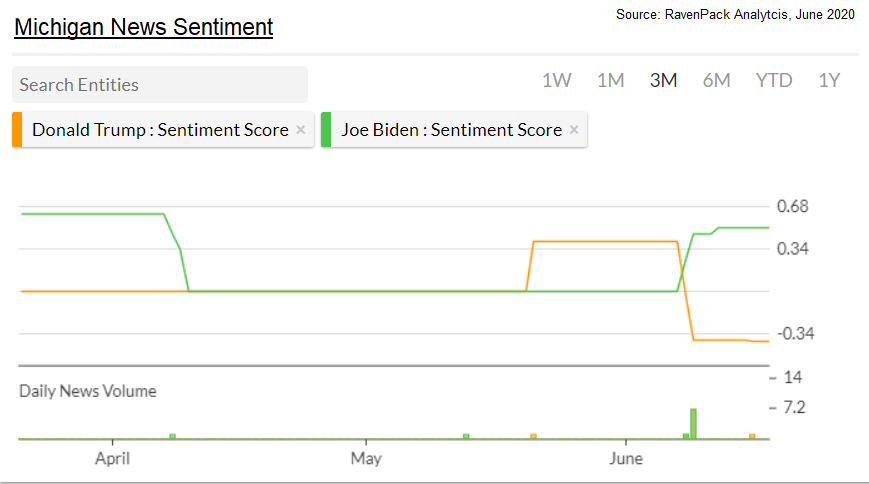 The above charts further confirm the results based on global news sources and the official polls.

Is this strong evidence that Biden will wrest the throne from Trump in November?

It does seem to suggest a high probability Biden could win, or at the very least give Donald Trump a run for his money, with certain caveats, which we will address below.

The first is that news sentiment was extremely low for Trump in April everywhere in the U.S. not just in swing marginals. This is shown by the fact that even in a Trump safe state, such as Wyoming, Biden scored higher.

Indeed, it is possible April was an abnormally bad month for Trump and therefore not as indicative as it has been historically.

What could be the reason? The U.S. was a ‘second phase’ pandemic country, so it was in April that it saw the highest increase in cases. It was also then that people started to criticise the government and Trump’s blase attitude in the early stages.

It was also in April that Trump gave the advice at a press briefing that people should inject themselves with disinfectant, widely seen as an embarrassing gaff which undermined his credibility – this is clearly shown on the chart of news sentiment for Trump in Philadelphia, based on local sources.

The same can be said for Trump’s poor sentiment in June due to the George Floyd protests. Could June also be dismissed as an unrepresentative anomaly, from the perspective of the Presidential election outcome?

It could, but at the same time, the reality is that the President’s support is falling because he got the handling of both these crises spectacularly wrong, and this could start to raise concerns amongst voters that he is not fit for office.

For more news analytics covering the race to the White House sign up to be the first to access our 2020 Presidential Election Monitor here.