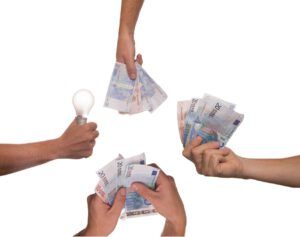 A look at the top 10 biggest venture capital funding rounds reveals why many companies are delaying their initial public offerings. Tech unicorns, in particular, have been able to raise billions of dollars without going public, so they just aren’t motivated to sell a bunch of stock.

JD.com’s $1.5 billion Series C funding round in 2011 was massive for its time, as multi-billion-dollar venture capital funding rounds didn’t become a common thing until years later. In fact, JD.com’s Series C round was the first funding round to exceed $1 billion in the last 10 years. The Chinese company later went public in 2014.

During the first quarter of this year, Google’s Waymo raised $2.3 billion. The self-driving company had its start in Google’s labs and was founded in 2009 by Anthony Levandowski. Waymo’s funding round was backed by Alphabet of course, and some big-name venture capitalists, like Andreessen Horowitz and Silver Lake Partners.

Waymo recently started testing self-driving trucks in Texas using two of the largest freight hubs in the country as testing grounds. The company has also continued to test its autonomous vehicles at its fake city while the COVID-19 pandemic shut everything down.

China’s Meituan-Dianping raised $3.3 billion in 2016, coming in third place for the largest venture capital funding rounds of that year. The Chinese shopping platform sells locally found consumer products and retail services. Wang Xing founded the company in 2010, and it has its headquarters in Beijing.

Meituan-Dianping offers vouchers for local services and entertainment as deals of the day. After Meituan’s merger with Dazhong Dianping, the company also hosted consumer reviews of restaurants and group-buying options similar to Groupon.

Ride-sharing giant Uber raised $3.5 billion in 2016, although it also had a $1.6 billion convertible note round in 2015. The company has expanded to offer food delivery through Uber Eats, package delivery, freight transportation and electric bicycle and motorized scooter rental through its partner Lime. The San Francisco-based company has operations in more than 900 metropolitan areas around the globe.

It’s estimated that Uber has more than 110 million monthly active users globally. In the U.S., it holds 67% of the market for ride-sharing and 24% of the food delivery market.

China’s Tenglong Holding Group raised $3.7 billion in 2019, making it the largest venture capital funding round of that year. Morgan Stanley Venture Partners led the Series A funding round, and the other core partner was China Nanshan Group.

The company provides in-depth customization services for global distributed data centers Tenglong Holding had over 10 large-scale data centers in the planning and construction phases as of December 2019. The company bought property to expand its facilities, and it expected to have 1.47 million share meters of data centers by the end of 2024.

WeWork raised $4.4 billion in its Series G funding round in 2017. So far it has raised $20.6 billion in total, according to Crunchbase. WeWork is a U.S.-based commercial real estate company that operates offices used as share workspaces for companies, especially technology startups.

The company was founded in 2010 and tried to go public in 2019, but the IPO failed. WeWork slashed its valuation from $47 billion to as low as $10 billion and removed Adam Neumann as CEO. Softbank, the company’s biggest investor, took over the company in October 2019.

Chinese ride-sharing firm Didi Chuxing raised $4.5 billion in 2016 to tie Ant Financial for the biggest venture capital funding round of that year. The company has raised multiple billion-dollar funding rounds through private equity as well.

Didi Chuxing is the biggest ride-sharing platform in the world, serving more than 550 million people in the Asia Pacific region, Latin America and Russia. Cheng Wei founded the company in June 2012 after eight years of working at Alibaba’s sales and Alipay divisions.

India’s Reliance Jio raised $9 billion from several growth investors and sovereign wealth funds in the U.S. and Asia during the second quarter of this year. Reliance is India’s largest mobile carrier, and it captured a user base of 400 million users in just a short time. The company has had multiple billion-dollar funding rounds.

Reliance Jio launched its services in December 2015 via a beta for partners and employees and then made its network publicly available in September 2016. The company is the third largest mobile carrier in the world.

San Francisco-based Juul raised $12.8 billion from Marlboro maker Altria in the fourth quarter of 2018. The company makes and distributes electronic nicotine vaporizers. The fact that it made this list of the top 10 biggest venture capital funding rounds is particularly interesting, given the push toward ESG investments and the growing number of lawsuits it faces in connection with e-cigarette use by minors.

Juul spun off from Pax Labs in 2017 and was co-founded by Adam Bowen and James Monsees. The company was valued at $38 billion as recently as last year.

The post These are the top 10 biggest venture capital funding rounds appeared first on ValueWalk.